i realized that it is February 10th. i also realize Christmas was in fact in December. im really really sorry.

okay, now that we got that out of the way:: one more disclaimer. i do not use proper grammer on my blog. so for all you english major people reading this right now. forgive me. i like periods and put way too many. i also hate capitalization. sorry. moving on.
well. project "100 letters for dad" was a success!!! but let me just say, christmas had many more suprises than this. i would say it might have been one of the most special Christmases we have ever had!

seth flew in the 19th, we got some good quality time together for a few days before the house turned into organized chaos. i love having him home. i find that when he is home i can get away with a lot more, and get into trouble a lot less. i have officially decided he is the favorite. haha just kidding i'm the favorite :)

so then the 24th, grandma barb and papa joe flew in from memphis, it's been years since we've had Christmas with them, so that was so special. a few hours after they landed jordyn, mark and malakai came over!

we had a delicious christmas eve dinner, played games, reminisced, and it was so fun!

i was being a sneaky little person for most of the night. dad kept asking where i was going, you all were still sending in letters until literally 1am! i was printing, stuffing envelopes, stamping, and stickering each one. i had my own little workshop set up in my bedroom. each letter went into a white envelope, i stamped the back with a "do not open until december 25th stamp" then the front got a "north pole postage" stamp and a sticker.

i put dad's envelopes in a big stack, and began to count. i got to 100. still a few more. final count on christmas eve was 102!! i tied them up in red and white packaging rope and stuffed them in a shoebox. then decided to be a little more sneaky and put that in a gigantic box. he had no idea what he was in for! i stayed up late watching tv with the brother, then off to sleep we went. 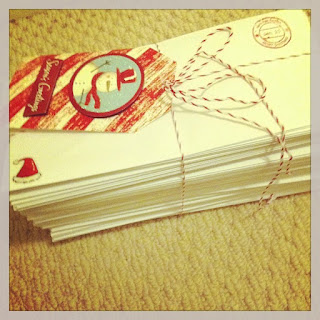 christmas morning came way too early. malakai comes scurrying into the room seth and i were in around 8am. "get up...get up shelby...get up seth!" i mean come on! he was too cute, so we dragged ourselved downstairs. got some coffee. cinnamon rolls (g-free!) and the present extravaganza began. oh. so during all the crazy. i got 2 more letters. so we were to 104. i was glowing. and sooo was jordyn. but not for the same reason ;)

it was so special. it literally took us 3 hours. yep. we open them one by one. it is a ceremony. would you expect anything less from the taylor's? okay. so halfway through jordyn goes "malakai has a very special gift to open everyone." so the little dude rips into this box, and he pulls out a t-shirt. it said "world best big brother" we went crazy. oh my goodness. another baby! as you can imagine, all the girls started crying. jordyn said "so whats in mommy's tummy!?" and he goes "a baby!!!" it was the cutest thing ever. did i mention that i also had to keep this baby news a secret until about a week ago? ya. thats right. try next to impossible! 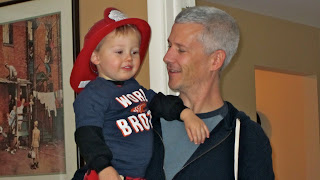 finally i tell dad he can open his present. dead last. he gets the giant box. tears it open. and reaches down to find the shoebox. he's acting so "roger" at this moment. i'm loving it. also. im a little embarassed of this picture. because it makes me look fat. but none the less. here you go. 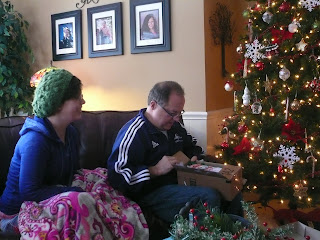 so he opens. and i mean, i'll just let you watch his reaction. priceless. i love him. sorry i'm crazy. hahaha i was so nervous.

as you can see. it was a little emotional. grandma cried. jordyn cried. i laughed so i wouldnt cry. the man was SHOCKED. the plan was victorious! he never saw it coming. that was the best part. he was seriously suprised. and still can't believe i did that! thank you to everyone who contributed. it took dad about a whole month to read your letters. he savored every single one. he's reading them all again. i love that about him. the first day he only read 10 and i was like "dad we gotta get done before next christmas" but he just took his good old time. now i gotta think of something even cooler for next year. holy cannoli. i have no idea how i'll top this.


well. it was a wonderful rest of the day. and then everyone got stuck here for 2 more because of the snowstorm. i loved it. here are a few more pictures...

i love you all!